Saturday & Sunday, 9/19-20/2015:  I thought I would throw in a few more pictures from Deadwood.  We had a great time here.  We camped at Whistler's Gulch which is just a short distance from downtown Deadwood.  Jeri took the trolley ($1.00 each way) right from the campground to the casinos while I puttered around and updated the blog at camp Saturday. We had an excellent lunch at The Lodge on the north side of Deadwood on Sunday.  It is a combination casino, hotel, restaurant/sports bar and is pretty new.  The food was very good. 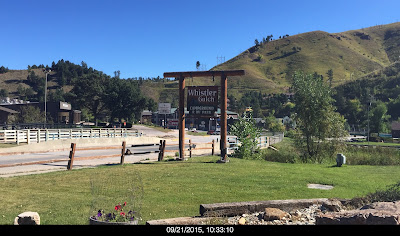 Here are some views from our campsite at Whistler's Gulch in Deadwood.  This was a very nice campground, close to downtown, yet it seemed to be more in the country.  The people who ran it were very  nice and friendly.  I stopped in to buy some firewood and asked how much and I think they said it was $5.00 for 10 pieces, so I paid the money and was going to load it, but the man working there said he would just deliver it to our campsite.  We went downtown and when we got back to our campsite there was this large stack of firewood beside the fire ring--I counted around 16-18 pieces altogether, along with a bit of kindling!!  They did us right!!!  And, it was good dry wood that burned well.  :-)  We highly recommend this campground if you are in the Deadwood area.  We considered Deadwood one of the highlight of our trip. 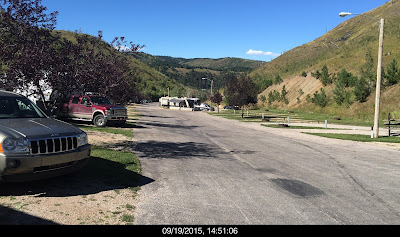 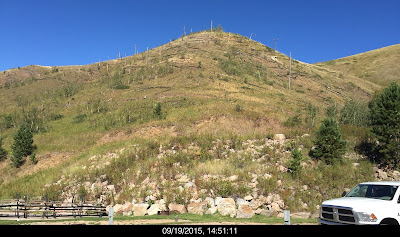 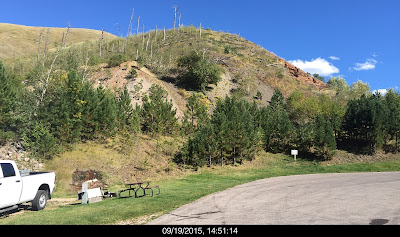 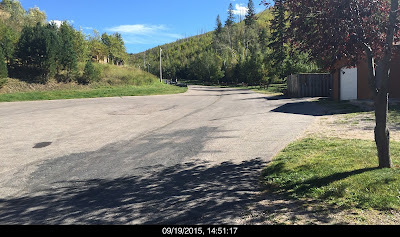 The campfire above was made using some of the crappy firewood we bought at Yellowstone and carried with us.

Yep, I got to visit Wild Bill Hickok's (and Calamity Jane's--they are buried next to each other in the Mariah Cemetery in Deadwood.  For the first time every I had to pay $5.00 to get into the cemetery.  I remarked to the lady collecting the money that I had never had to pay to go into a cemetery in my life--she just shrugged.  LOL  Actually, I'm not sure how they get away with charging since it's a public cemetery, but what the Hell, I guess the money goes to keeping the place up. 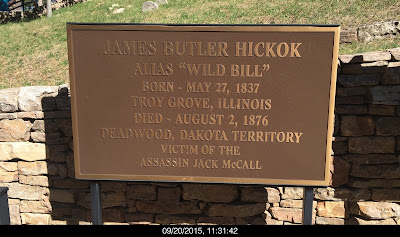 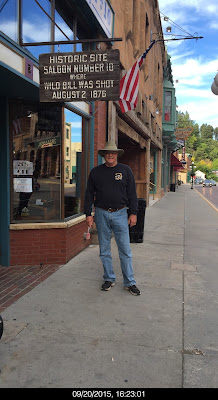 This was the site of the original Saloon Number 10 where Wild Bill Hickok was murdered by the dirty, cowardly Jack McCall who shot him in the back of the head.  The current Saloon Number 10 is across the street and down a block or so and is a really neat saloon, with sawdust on the floor and a lot of interesting pictures and things hanging all over the walls. 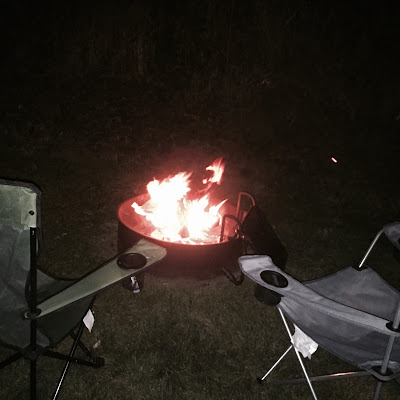 The next two pictures are deer that were in the campground at Whistler's Gulch. 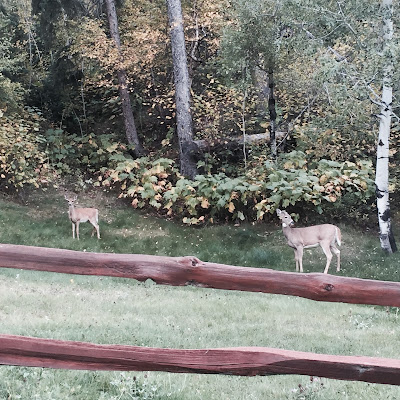 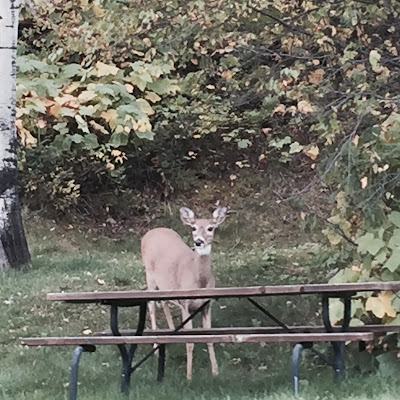 Our campfire in Deadwood (note Jeri's comment toward the end-LOL)

Monday, 9/21/2015:  We broke camp this morning and sadly said good-bye to Deadwood and headed east, leaving the West behind.  We camped tonight at the R&R Campground right beside I-90 in Mitchell, SD after spending the entire day traveling east through South Dakota.

This was just a spot to park for the night--not much to do or see.  It was an okay campground; clean and neat.  We didn't even unhook the trailer from the Jeep on these one-nighters. Only really negative thing about this was we were on the end, pretty close to I-90 and an exit, so we could hear some traffic and it got a bit noisy at times when semis were decelerating at the exit.  Not too bad, though.

Tuesday, 9/22/2015:  Big storm brewing near Layton, Iowa on I-80 the today, so we pulled into a rest area to see what would develop and we watched the radar on our iPhones.  We thought we would miss it, so started back on I-80, but ran into the storm.  We got off at an exit that said it had a Rest Area, but didn't see it and ended up driving five miles up a two-lane highway before finding a place to turn around and get back to I-80.  Then we ran into more heavy rain that made us decide to pull into a gas station, along with some other RV'ers to wait the worst of it out.


Wednesday, 9/23/2015:  After driving from Iowa and into Illinois we spent another one nighter in northern Illinois at a former Yogi Bear RV park (now a Timberline RV Park) in what we refer to as the "dust pit".  It seems the park was heavily packed with pipeline workers that have trailers and follow the work.  They were okay and were good neighbors, but the roads in the campground were dusty gravel and no matter how slow they drove they raised a lot of dust.  We did some loads of laundry here and Jeri took a shower, but said the shower was pretty dirty and had standing water in it.  Yuck!!  She should have just showered in our RV. LOL  We really do not recommend this place for anything other than a quick one-nighter if you cannot find anything better.

Thursday, 9/24/2015:  The next day (Thursday) we were back on the road to Windsor and Wolf Creek State Park west of Windsor (my hometown).  We arrived mid-afternoon, got set up in our campsite and spent a lovely three nights here.   We drove into Windsor and went to the grocery store to buy some groceries for us and the cook out that evening.

Friday, 9/25/2015:  Friday morning Jeri and I went to Shelbyville to visit my stepfather, Ralph at the nursing home.  He is 94 and is not doing very well.   Afterwards, we went to the local Wal-mart so Jeri could pick up some things.

Friday afternoon my sister Roslyn drove out and visited with us for a while and that evening after she left we explored the campground area (almost hit a deer), then drove into Windsor and ordered a pizza at the Casey's gas station/store.  While waiting for it to get made we had a beer and enjoyed some good conversation with Joe Hester and others at the Windsor American Legion Post 725 (I'm a member).  Then we took our pizza back to the campground and ate it while sitting around a nice little campfire.
Saturday, 9/26/2015:  We visited Ralph Saturday morning and said good-byes.  I'm kind of doubtful that I will see him alive again unless he takes a big turn for the better. Sad...


On Saturday evening we attended the beautiful outdoor wedding of our grand-daughter, Sami Jo to Chandler Jaques.  Sami was totally beautiful in her wedding gown!!  I was so proud watching my son Donnie walk his daughter down the aisle and give her away in marriage.  I think only a father with a daughter can understand just how emotional this act is.  Chandler's father married them in a very nice ceremony. 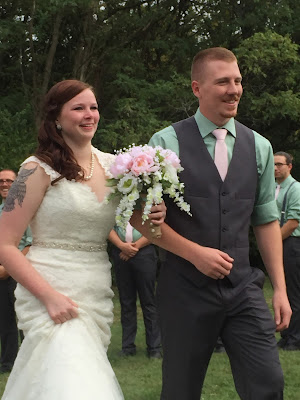 The reception was held later that evening in Charleston and featured a very good dinner and was a lot of fun.  When Donnie and Sami started their father-daughter dance I was fighting back tears,,,,, that is until they broke out into this funny dance routine they had worked up!!  Too funny!  I could not believe Donnie was dancing like that!!  LOL

Nice!
Wolf Creek State Park is a lovely place.  The weather was great and the humidity was pretty low for Illinois.  We had a great time here!  Of course, it was made much better by the wedding and visits with family we don't get to see very often.

Sunday, 9/27/2015:  On Sunday morning we broke camp and started the long trip home to Florida.  We spent Sunday night in the Whispering Woods campground near Manchester, TN after a bit over 400 miles of the nearly 1,000 miles we needed to drive to get home.  We camped in the trees.  This was an okay place to spend the night, but the facilities didn't look all that hot, although we didn't use them anyway.

Monday, 9/28/2015:  We got a decent start this morning from the campground and had a mostly wet drive.  The last night of our trip, we camped at the Ponderosa RV Park near Perry, GA in the rain.  It was kind of a sorry way to spend our last night of a 30 day trip, but we were snug and dry in our (now) trusty little Coleman 23' trailer.  After Jeri checked in the owner had me get in his pickup with him and he drove me to the campsite, giving me instructions showing me how to get into and out of it, then took me back to our rig and had me follow him to the campsite--now that was good service!  However, the campsite was on very wet grass and sand--not so nice...

Tuesday, 9/29/2015:  This morning we did a final dump and flush of our holding tanks into the sewer hookup at the campsite, then broke camp and headed the final 314 miles through south Georgia and north Florida to home in Palm Coast.


We arrived safely home around 3:30 PM to find our home in the same shape we had left it--a very good thing!  LOL

Wrap-up:
We had an awesome, wonderful time on our long trip.  I think I could have just kept on going, but it was time to get back home.  By the way, we stopped a total of 55 times for gasoline on the trip, but most of those were to put in a half tank or less and some were just topping up the tank because of restroom or stretch-our-legs stops.  LOL  Jeri says we spent around $1,300 on gas for the over 6,000 miles of traveling and another $700 or so for campground fees.  Plus of course, an undisclosed sum for souvenirs, gifts, food, miscellaneous stuff for the trailer, etc. LOL  We did make some additions to the trailer while on the trip--the already mentioned curtain over the window in the door, and we added step pads to the steps of the trailer and a long rug down the center aisle, as well as Linx leveling Leggo blocks (they worked, but I want the Andersen leveling system instead--much faster and easier).

We actually did pretty well in not eating out a lot.  We had two major dinners out:  one in Parker where we treated some family to dinner and once in Cody.  Other than that and with the exception of a few snack-type items here and there we ate most meals in the camper.

We've already been discussing this and have decided on future trips one-nighters are mostly going to be "freebies" along the road at rest areas, Wal-marts, TAs or whatever.  It's kind of silly to pay $20-$40 to camp for one night when we may not even hook up to water, sewer or even electric--in other words, just to eat and sleep before heading out the next morning.  The exception to this would be during hot weather when the A/C might be desired.  That would require at least a 30 amp electrical hookup.  We had six nights of free camping on this trip.

By the time we finished the trip we had worked out fairly good, regular routines for setting up and breaking down camp and could do it fairly quickly, especially those times when we did not unhook the trailer from the Jeep, although I did almost always level the trailer, as well as running down the stabilizer jacks on all four corners for added stability.

I will also be installing an electric tongue jack very soon on the trailer--all that manual cranking up and down gets tiresome!!  LOL  (or I'm getting lazier...)  I am not sure if one 30-day trip makes us veteran RV'ers (pretty sure it does not), but we did learn an awful lot on this trip.  Jeri now has plans for me to add some additional shelving and/or slide-out trays to the pantry and a bit of a re-do to the upper rear side cabinets.  We also realize that we probably lugged around way too much food, since I unloaded a LOT of it when we got back home.

Some additional pictures from our trip:

I'll end this blog by leaving you with our final campfire of the trip at Wolf Creek State Park.